ABSTRACT
Acquired reactive perforating collagenosis (ARPC) is a unique skin disorder that is a subtype of acquired perforating disorders (APD). ARPC is often associated with poorly controlled diabetes mellitus and chronic renal failure on dialysis. ARPC currently lacks standardized management. The current treatment modalities include phototherapy, topical corticosteroids, oral and topical retinoids, and antihistamines. These therapies have been implemented with varying degrees of success. It is classically described as skin-colored papules and nodules with a central keratotic plug commonly located on the upper and lower extremities. In this case report, we discuss a patient who presented with a two-month history of pruritic papules on the neck and trunk, ultimately diagnosed by skin punch biopsy as ARPC, and highlight the successful use of calcipotriene and tretinoin in treating this disorder.

CONSENT
Informed consent was provided by the patient for use of associated images and publication of this case report.

CASE REPORT
A 42-year-old Black woman with a history of insulin-dependent diabetes mellitus, hypertension, and diabetic nephropathy, presented with a two-month history of a pruritic eruption on the neck, chest, and back. The lesions also occurred on areas of the skin that were induced by scratching.

On the physical exam, hyperpigmented papules, some with a central keratotic plug, were noted on the neck, chest, and back (Figure 1A-D). Some lesions on the chest and back were distributed linearly (representing koebnerization). The Koebner phenomenon is the development of new skin lesions on previously healthy skin resultant from minor skin trauma or irritation.1Sagi L, Trau H. The Koebner phenomenon. Clin Dermatol. 2011 Mar-Apr;29(2):231-6.
The face, upper extremities, palms, soles, and mucous membranes were spared. The initial differential diagnosis included folliculitis, papular eczema, and arthropod bites. The patient completed multiple courses of mid-and high-potency topical corticosteroids and a one-month course of doxycycline 40mg daily, with no improvement. 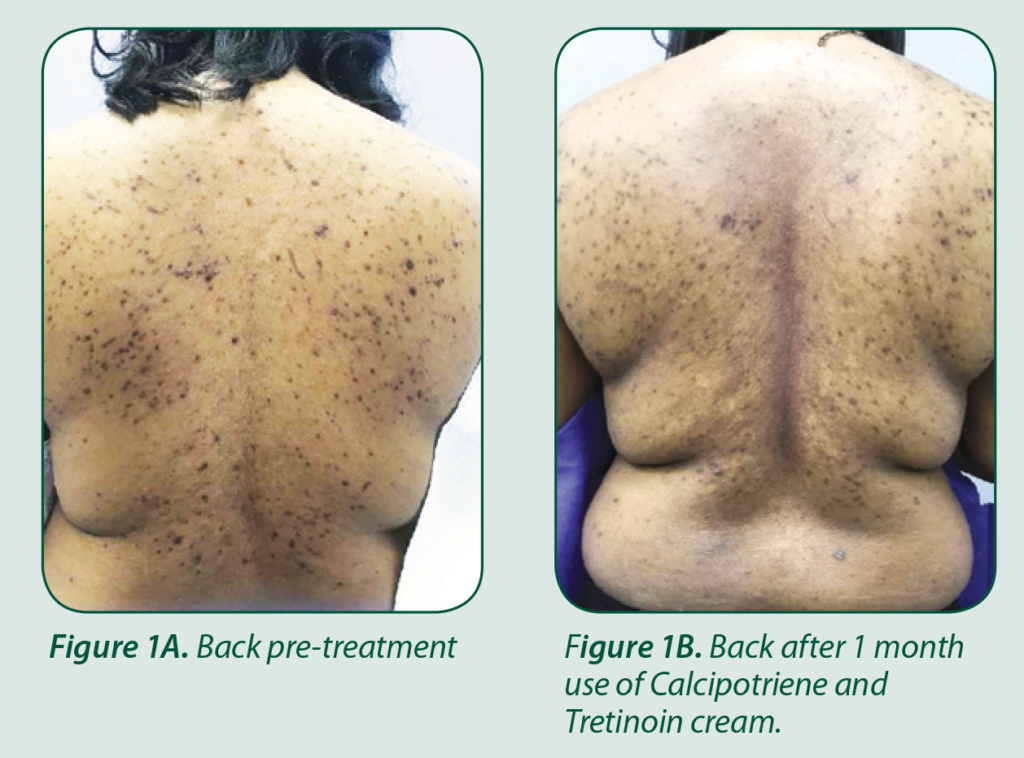 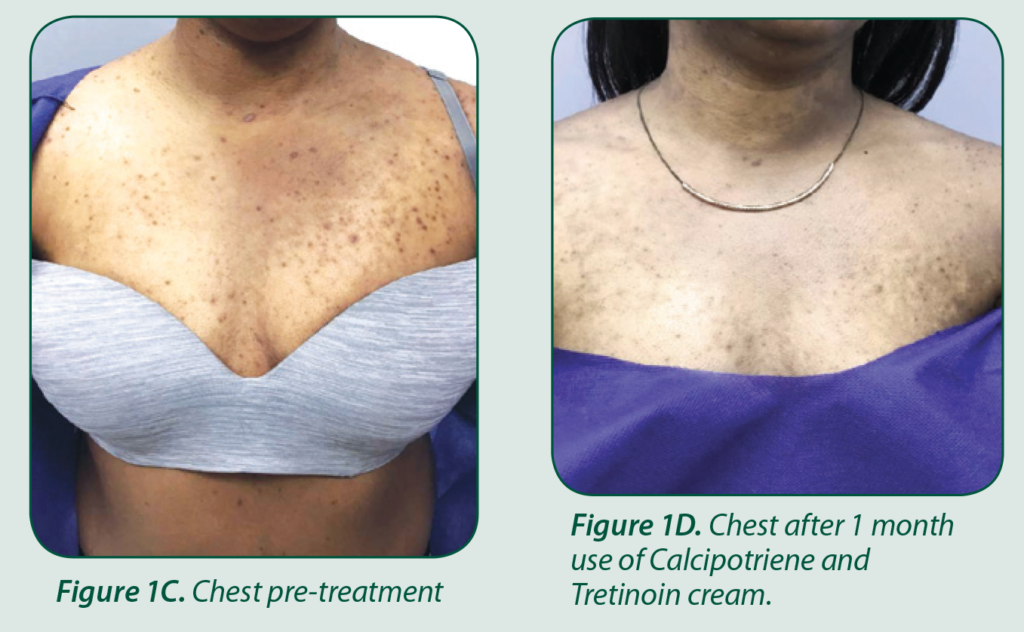 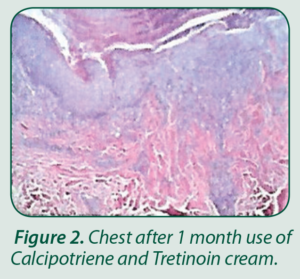 A 4mm punch biopsy was then obtained from the left upper back and sent for hematoxylin and eosin (H&E) stain. The pathology report showed epidermal invagination with entrapped inflammatory debris and extruded collagen fibers traversing through the epidermis, consistent with a diagnosis of acquired reactive perforating collagenosis (Figure 2). The patient improved after a one-month application of once-daily calcipotriene 0.005% and once nightly tretinoin 0.1% cream. During the one-month follow up, the patient reported a reduction of pruritus and lesions on the chest and back were notably thinner and less hyperpigmented. The patient was lost to follow-up and therefore total treatment duration and endpoint results were not obtained.

DISCUSSION
Acquired perforating dermatosis (APD) is a type of chronic skin condition with multiple subtypes including Kyrle disease, ARPC, and acquired elastosis perforans serpiginosa. They are commonly associated with diabetes mellitus, chronic renal failure, and in rare cases, human immunodeficiency virus (HIV), malignancy, liver disease, hypothyroidism, and medications such as biologics.2Lynde CB, Pratt MD. Clinical Images: Acquired perforating dermatosis: association with diabetes and renal failure. CMAJ. 2009;181(9):615. doi:10.1503/cmaj.082013
This group of skin conditions is characterized by perforation of the dermal connective tissue through the epidermis. In this case report, we will focus on the patient’s specific subtype of ARPC.

ARPC is an uncommon skin condition that was first described by Mehregan et al in 1967.3Mehregan AH, Schwartz OD, Livingood CS. Reactive perforating collagenosis. Arch Dermatol 1967;96:277-82. There are two types of ARPC: the inherited type, which is more common in children, and the acquired type seen in adults.

• Elimination of necrotic basophilic collagen bundles into a cup-shaped epidermal depression as seen in biopsy specimens
• Umbilicated papules or nodules with a central, adherent keratotic plug
• Onset of lesions after age 18 years

ARPC often occurs in association with chronic renal failure in patients with underlying diabetes, with a prevalence of 10 percent in dialysis patients in the United States.5Fei C, Wang Y, Gong Y, Xu H, Yu Q, Shi Y. Acquired reactive perforating collagenosis: A report of a typical case. Medicine (Baltimore). 2016;95(30):e4305. doi:10.1097/MD.0000000000004305 This may be related to skin trauma secondary to uremic pruritus or xerosis. However, there have been reported cases in patients with hypothyroidism, liver disease, and lymphoma.

In the literature, ARPC has typically been described as skin-colored, umbilicated, dome-shaped papulonodules with keratinous plugging that sometimes occur at sites of trauma on extensor surfaces of the extremities.3Mehregan AH, Schwartz OD, Livingood CS. Reactive perforating collagenosis. Arch Dermatol 1967;96:277-82. Fewer reports describe lesions on the trunk and face. In this patient, the lesions were primarily on the trunk, sparing the extremities. Additionally, her lesions were hyperpigmented as could be expected in a patient with skin of color (Fitzpatrick skin types IV-VI). The management of ARPC is challenging and often unsatisfactory as there is no standardized treatment algorithm. The literature documents cases of successful management of ARPC with oral and topical retinoids, calcipotriene, allopurinol, doxycycline, and ultraviolet B (UVB) and ultraviolet A (UVA) phototherapy.6Tilz H, Becker JC, Legat F, Schettini AP, Inzinger M, Massone C. Allopurinol in the treatment of acquired reactive perforating collagenosis*. An Bras Dermatol. 2013 Jan-Feb. 88(1):94-7. 7Brinkmeier T, Schaller J, Herbst RA, Frosch PJ. Successful treatment of acquired reactive perforating collagenosis with doxycycline. Acta Derm Venereol. 2002. 82(5):393-5. 8Vion B, Frenk E. [Acquired reactive collagen disease in the adult: successful treatment with UV-B light]. Hautarzt. 1989 Jul. 40(7):448-50. In our patient, calcipotriene 0.005% cream in the morning and tretinoin 0.1% cream nightly proved to be an effective treatment for her ARPC after one month of starting treatment.

Calcipotriene, a vitamin D analog, has often been used to treat disorders of keratinization with considerable efficacy. The literature suggests that calcipotriene has a hypoproliferative effect on keratinocytes in the epidermis and demonstrates efficacy in inhibiting cell growth and development without direct harm to the cell.9Thiers BH. The use of topical calcipotriene/calcipotriol in conditions other than plaque-type psoriasis. Journal of the American Academy of Dermatology. 1997 Sep;37(3 Pt 2):S69-71. 10Bagot M. Charue D. C. Lescs M. Pamphile R. Revuz J: Immunosuppressive effects of 1,25- dihydroxyvitamin D, and its analogue calcipotriol on epidermal cells. Br J Dermatol 1994:130: 424-431. Calcipotriene is FDA approved for the treatment of chronic plaque psoriasis, however, it may have potential benefits for conditions with a component of hyperkeratinization, such as ARPC. The mechanism of action of tretinoin is theorized to be drug binding with retinoic acid receptors to decrease matrix metalloproteinase activity and increase production of procollagen leading to the augmentation of collagen type I and III.11Uchida G, Yoshimura K, Kitano Y, Okazaki M, Harii K. Tretinoin reverses upregulation of matrix metalloproteinase-13 in human keloid-derived fibroblasts. Exp Dermatol. 2003;12 Suppl 2:35-42. doi: 10.1034/j.1600-0625.12.s2.6.x. PMID: 14756522. 12Jensen AM, Lladó MB, Skov L, Hansen ER, Larsen JK, Baadsgaard O. Calcipotriol inhibits the proliferation of hyperproliferative CD29 positive keratinocytes in psoriatic epidermis in the absence of an effect on the function and number of antigen-presenting cells. Br J Dermatol. 1998 Dec;139(6):984-91. 91. doi: 10.1046/j.1365-2133.1998.02553.x. PMID: 9990360. Although no current studies exist, tretinoin’s effect on collagen homeostasis may contribute to its success in the treatment of ARPC. Tretinoin has also been proven to increase keratinocyte turnover which may improve the hyperkeratotic component of ARPC. Additionally, its ability to improve hyperpigmentation may be of further benefit to patients with skin of color who develop deeply hyperpigmented lesions and post-inflammatory hyperpigmentation.13Bandyopadhyay D. Topical treatment of melasma. Indian J Dermatol. 2009;54(4):303-309. doi:10.4103/0019-5154.57602 https://www.ncbi.nlm. nih.gov/pmc/articles/PMC2807702/

CONCLUSION
This case highlights the clinical presentation of ARPC in skin of color and the success of topical calcipotriene and tretinoin therapies. Some barriers to these treatment options could include issues with insurance coverage, the price associated with the number of tubes needed to treat larger body surface areas. Although these issues were not a factor in the case, we do acknowledge that these specific treatment options may not be readily available for every patient. ARPC has a strong association with diabetes and related nephropathy; chronic conditions that disproportionately affect The Black patient population.14United States Renal Data System . USRDS annual data report: epidemiology of kidney disease in the United States. Bethesda, MD: National Institutes of Health, National Institute of Diabetes and Digestive and Kidney Diseases; 2017. This patient demographic is less likely to have access to a dermatology provider and other specialties including endocrinology and nephrology. Therefore, in the literature, there are few representative images and reports of this condition in patients with skin of color. Although ARPC is generally self-limiting, the resulting scarring and dyspigmentation can be striking, causing psychological distress and affecting the quality of life. For these reasons, timely diagnosis and treatment are paramount.

Jameka McElroy-Brooklyn, MSPAS, PA-C, is a physician assistant. She currently serves as a PA ambassador for the National Commission on Certification of Physician Assistants (NCCPA). Ms. McElroy-Brooklyn was with the Dermatology Department at Howard University College of Medicine in Washington, DC, at the time this article was submitted for publication consideration.

Mahima Bhayana, MD, MBA, is with Howard University Hospital. She was a fourth year medical student at Howard University College of Medicine at the time this article was submitted for publication consideration.

Ginette A. Okoye, MD, FAAD, is the Department Chair and Professor of Dermatology at Howard University College of Medicine.