Peter A. Young, MPAS, and Lia C. Keller, MD, FAAD, are from The Permanente Medical Group, Department of Dermatology in Sacramento, California.

INTRODUCTION
Atopic eruption of pregnancy (AEP) is an umbrella term created in 2006, which encompasses the older terms eczema in pregnancy, prurigo of pregnancy, and pruritic folliculitis of pregnancy. This updated phrase was part of a revision to the hallmark 1983 classification scheme created by Holmes and Black, which first defined the specific dermatoses of pregnancy as a group of pruritic skin conditions occurring uniquely in gravid women.1,2 The most common dermatosis of pregnancy, AEP is characterized by a pruritic morbilliform eruption equally affecting the trunk and extremities with onset before the third trimester (incidence: 75%, mean: 18+9 weeks). Patients often present with numerous excoriations due to severe pruritus. Although most diagnosed with AEP have some atopic tendencies, only 20 percent have pre-existing atopic dermatitis. A correct diagnosis is important to ensure health of the fetus.1-3

CASE PRESENTATION
A 33-year-old woman, 25 weeks pregnant with her second child, was referred to dermatology for itching and what she described as hives on her extremities, abdomen, and lower back, ongoing since week 15 of her pregnancy. She had failed to respond to wet wraps with mupirocin and fluocinonide cream 0.05% twice daily for two weeks (recommended by her primary physician). Her history included eczema, epilepsy, and attention deficit hyperactivity disorder. 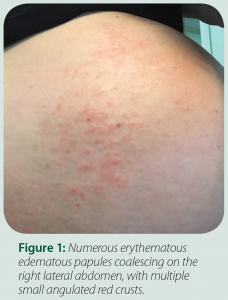 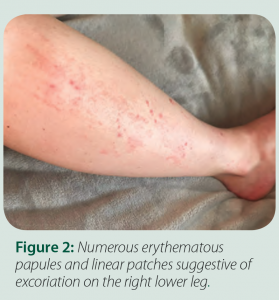 Treatment was started with topical clobetasol 0.05% ointment twice daily, cetirizine 10 mg each morning, and diphenhydramine (25-50 mg each evening). She was encouraged to apply ice packs to itchy areas in lieu of scratching. The patient went on to deliver her child without complications via cesarean section at 39 weeks gestational age, with subsequent resolution of her dermatitis.

DISCUSSION
AEP’s hypothesized pathogenesis is rooted in the mother’s immune adaptations, requisite to tolerate her (antigenically different) in utero child. During pregnancy, maternal Th1 cytokine production and cell-mediated functions are downregulated, and Th2 cytokines and humoral response are increased. As a Th2-dominant disease, atopic diathesis may be “unmasked” in this immunologic setting, manifesting AEP as a result.1

A pregnant woman with pruritus and skin lesions requires urgent evaluation to ensure health of the fetus. Atopic eruption of pregnancy must be differentiated from polymorphic eruption of pregnancy (PEP, formerly called PUPPP), intrahepatic cholestasis of pregnancy (ICP), and pemphigoid gestationis (PG) formerly called herpes gestationis. In all four, severe pruritus is the main symptom. Although not itself associated with fetal risk, differentiating AEP from these is important: ICP can result in prematurity, fetal distress, and stillbirth, and PG. Where the pregnant pruritic woman presents with acute onset of pruritus during pregnancy and only secondary skin changes, ICP should be suspected, and serum bile acids checked. Where primary lesions are vesicles and bullae appearing in the third trimester, PG should be suspected, and a perilesional biopsy sent for direct immunofluorescence.1,3

In our case the lack of marked spongiosis or papillary dermal edema made the urticarial stage of pemphigoid gestationis unlikely, hence the primary differential diagnosis was PEP, polymorphic eruption, which can be relatively challenging to tell apart from AEP compared with the other specific dermatoses of pregnancy. Fortunately distinguishing these two can be a primarily academic exercise: they are managed similarly, neither threatens fetal health, and both improve or resolve postpartum.3 Since biopsy findings of AEP and PEP can be nonspecific, and the terminology for specific dermatoses of pregnancy was revised in 2006 (recently enough to be after many currently practicing dermatopathologists completed their fellowships), the clinician may have to employ clinicopathologic correlation “outside the box” of what suggested diagnoses are listed on the pathology report. Based on our patient’s atopic diathesis, onset prior to third trimester, characteristic primary lesion morphology, and classic distribution on the extremities, we categorized the patient as having AEP rather than PEP. 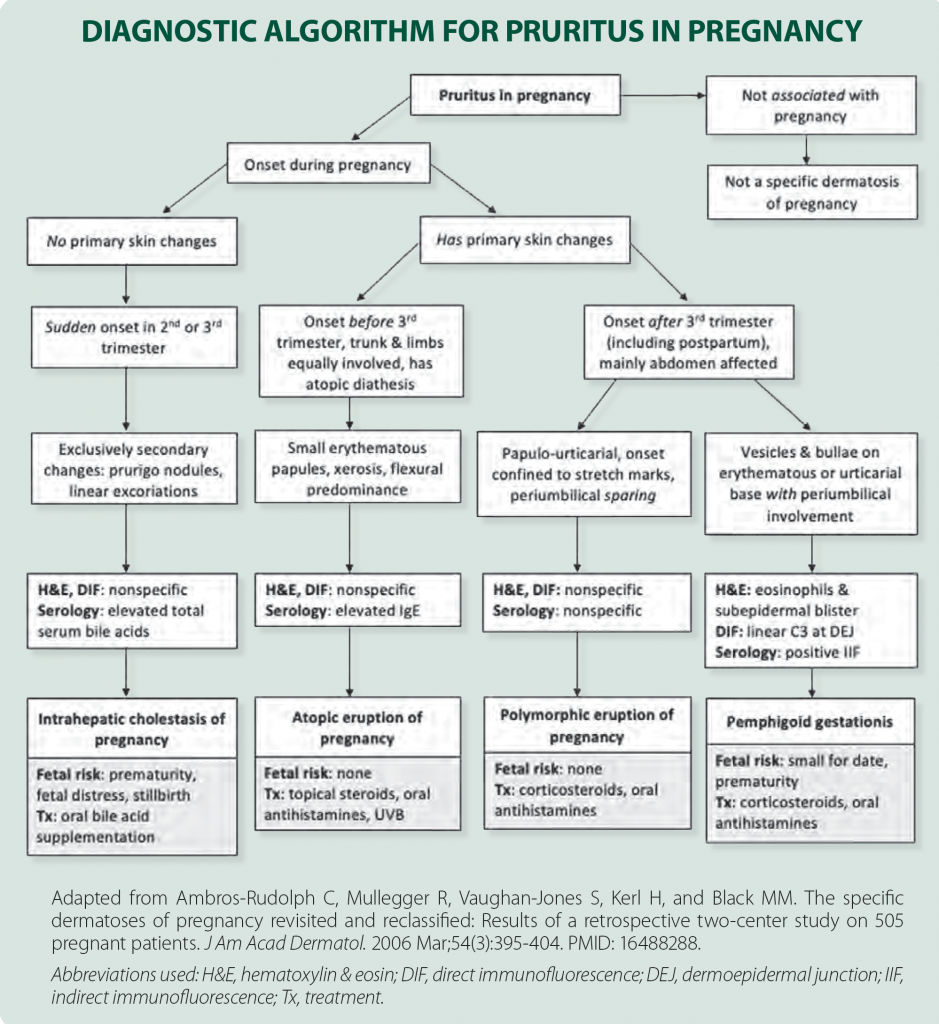