ABSTRACT
Breast cancer affects approximately 1 in 8 women and is the most common malignancy among women. Alopecia neoplastica is a rare cutaneous manifestation of breast adenocarcinoma with less than 30 reported cases worldwide. The skin is typically not a target organ for cutaneous metastasis, however, breast adenocarcinoma carries a higher risk. Here, the author describes the case of a woman with a history of breast carcinoma who was clinically disease free for over 11 years. She presented to an outpatient dermatology appointment with rapid-onset alopecia and was diagnosed with alopecia neoplastica and subsequent diagnosis of metastatic disease. This case illustrates the importance of considering alopecia neoplastica as a differential diagnosis in adult women presenting with localized alopecia who also have a history of breast carcinoma.

CASE REPORT
A 67-year-old White female patient presented to an outpatient dermatology appointment with a patch of rapid-onset hair loss for three months duration. This was isolated to one area of the parietal scalp and otherwise asymptomatic. She began taking a biotin supplement for two months on her own to no avail. The patient’s past medical history included hypothyroidism adequately controlled with levothyroxine; infiltrative lobular breast cancer of the left breast treated with paclitaxel, doxorubicin, cyclophosphamide, radiation, and lumpectomy in 2006; and asthma controlled with budesonide/formoterol and albuterol. Physical examination revealed a sharply demarcated 2cm inflamed atrophic alopecic plaque (Figure 1). Dermatoscopic exam revealed no perifollicular scale or erythema on the right posterior parietal scalp. A 4 mm punch biopsy was obtained. On further skin examination, there were no other areas of alopecia or any palpable lymphadenopathy in any cervical, supra/infraclavicular, or axillary nodes. 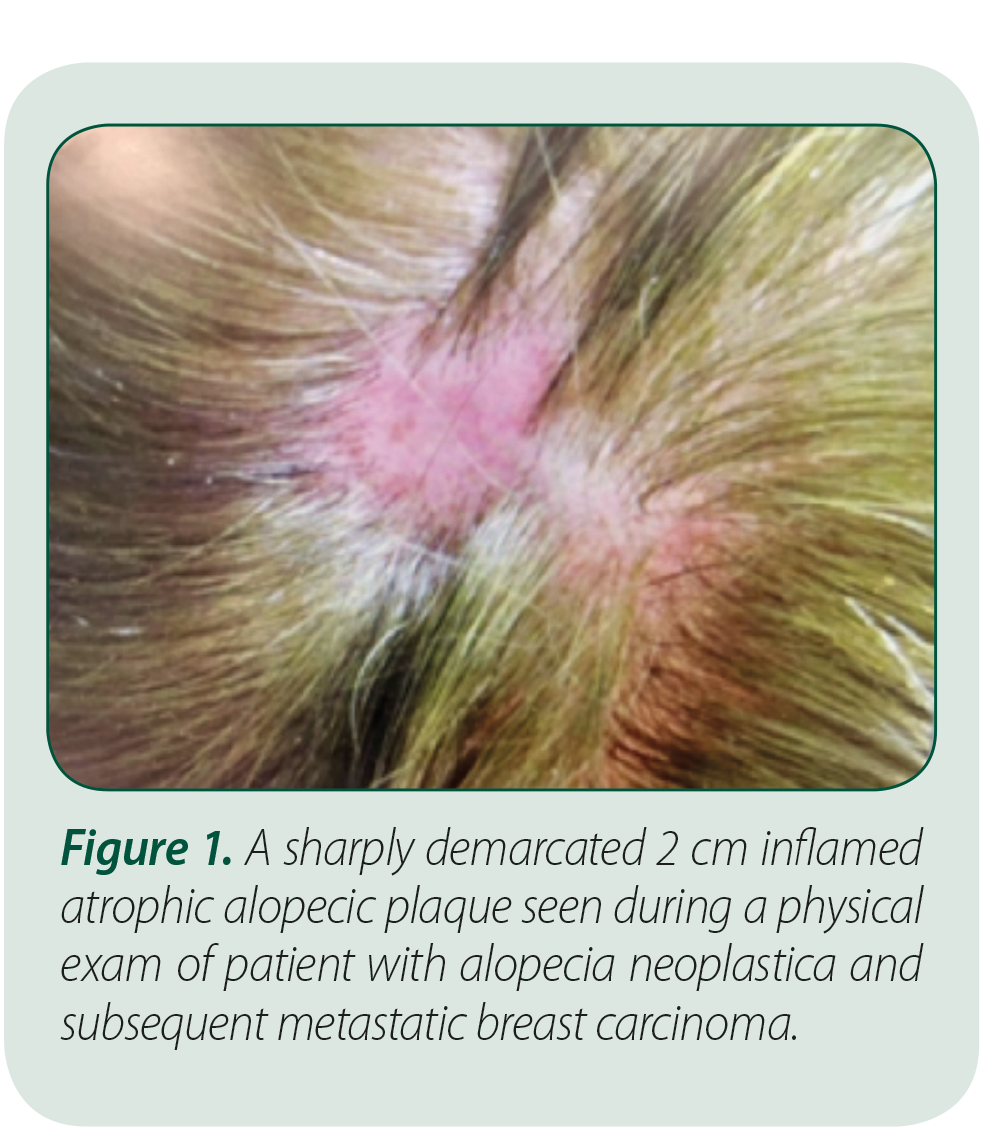 Pathological examination revealed a malignant infiltrative tumor composed of atypical ovoid cells in a single file within a desmoplastic stroma. Immunohistochemical stains were strongly positive for cytokeratin-7 and negative for S100, Melan-A, and cytokeratin-20. Additional stains were ordered and were strongly and diffusely positive for GATA-3, PR, and ER. Tumor cells were negative for overexpression of HER-2.

Based on these clinical pathological findings, the diagnosis of alopecia neoplastica was made and the patient was promptly referred to oncology for further work up and staging. After CT imaging, metastatic lesions were noted to the liver, lungs, bones, chest wall, axillary lymph nodes, and brain. Tumor markers were estrogen receptor positive, Her-2/neu negative. The patient was placed on palliative care.

DISCUSSION
Alopecia neoplastica is a rare cutaneous manifesta–tion of metastatic carcinoma with currently 29 reported cases worldwide1 and represents a poor prognosis with limited survival.2 Currently, the median survival from diagnosis is 6.8 months.3 However, the average length of time between cancer diagnosis and diagnosis of alopecia neoplastica is currently 4.5 years.4 The most commonly reported carcinoma is breast with 23 reported cases, however it can also be seen with gastric, colon, and cervical carcinomas.1

Routes of metastasis consist of direct invasion of malignant cells, lymphatic or hematogenous spread or induced by therapeutic procedures.5,6 Five to 10% of patients with cancer develop skin metastasis with a predilection for the chest, abdomen, and scalp.5,7 Previous reports indicate that the scalp is the site of four percent of skin metastasis.8 However, according to a report by Cho et al, breast cancer metastasis to the skin has an incidence as high as 23.9 percent.6 Alopecia neoplastica can appear clinically similar to alopecia areata or other types of cicatrical alopecia or present as firm nodules and be located anywhere on the scalp.1 The presence of erythema may help differentiate alopecia neoplastica from alopecia areata.4 The mechanism for alopecia neoplastica is currently uncertain, however, given the vascularity of the scalp, hematogenous spread is likely with destruction of pilosebaceous units.1 Cohen et al postulated that fibrosis of tissues was responsible for atrophy of hair follicles.9

CONCLUSION
Given the rarity of this condition, the differential diagnosis needs to be entertained in adult women presenting with localized alopecia with a history of breast carcinoma. In this particular case, the patient was clinically disease free for over 11 years prior to onset of alopecia and subsequent diagnosis of metastatic disease. Further, she was also lost to routine follow up with oncology since 2014 and the patient was then lost to dermatology follow up once areferral was initiated.

Sara M. Wilchowski, DMSc, PA-C, is a PA committed to advancing the field of dermatology. She holds two certifications from the Society of Dermatology Physician Assistants as a Diplomate and Diplomate Fellow. She has completed all her coursework through the Institute for Functional Medicine and is a candidate for certification. She has held numerous appointed and elected roles with the SDPA, spanning over a decade. She is past president of the Michigan Dermatology PAs and 2016 Michigan Dermatology PA of the year.