Kara Mudd, MSPAS, PA-C, is a diplomate fellow of the Society of Dermatology Physician Assistants who practices at Associates In Dermatology in Louisville, Kentucky. She has a clinical focus in Allergic Contact Dermatitis and Atopic Dermatitis. Kara is also actively involved in PA education as an Assistant Professor at Sullivan University and is currently pursuing her Doctor of Medical Science through the University of Lynchburg.

Disclosures: Ms. Mudd is a consultant for Regeneron Pharmaceuticals, Inc.

ABSTRACT
Allergic contact dermatitis (ACD) is often underdiagnosed in pediatric patients, especially those with a diagnosis of atopic dermatitis (AD). Recent literature has shown that the incidence of ACD in children is increasing and several factors of atopy play a role. It is important to recognize the possibility of ACD in the pediatric population and perform extended patch testing with the North American Contact Dermatitis Group (NACDG) core series in these patients. Patch testing can help with allergen identification and management of chronic dermatitis.

INCIDENCE OF ALLERGIC CONTACT DERMATITIS IN CHILDREN WITH ATOPY
Allergic contact dermatitis (ACD) was once thought to be a disease primarily of adulthood, while atopic dermatitis (AD) was thought to be the predominant dermatitis of infancy and childhood. Over the past decade, ACD has been identified as a common skin condition in children ages 5-17, especially in those with a diagnosis of atopic dermatitis.1 A recent literature review of patients age 1-18 with a diagnosis of AD revealed that between 30.5%-92.6% of patients had positive patch test results that were clinically relevant.2 Hand eczema in children has also been reported to have a high probability of ACD.3 ACD has been reported in children of all ages, including neonates and adolescents, and the incidence is thought to be increasing.4

PATHOPHYSIOLOGY OF ACD
The pathogenesis of ACD is a Type IV delayed hypersensitivity reaction. It begins with the sensitization phase when the patient is initially exposed to the allergen. Antigen-presenting cells then present the allergen to T lymphocytes. Upon repeat exposure to the allergen, the memory T lymphocytes activate the inflammatory cascade within 12 to 24 hours of exposure and result in a localized or systemic dermatitis.5 It is important to note that the skin or systemic symptoms may begin days, or sometimes weeks, after the exposure. It is deemed that several factors increase the lifetime risk of developing ACD in pediatric patients. These risk factors include early exposure to potential allergens in topical emollients and sunscreens, play products, such as paints and slimes, and use of makeup and personal hygiene products.6 ACD has recently been shown to be amplified in patients with both skin and respiratory atopy.7,8 Risk is increased due to dysfunctional skin barrier and disruption of the skin microbiome that is typically seen in AD, thus allowing increased allergen penetration and activation of the inflammatory cascade.8 An overlap of increased specific T helper cells and filaggrin mutations has also been found in both AD and ACD.8,9

COMMON ALLERGENS
The most prevalent contact allergens are similar between adult and pediatric patients. Exact incidence varies between studies. The most common allergens are nickel, fragrance mix, cobalt, propylene glycol, methylisothiazolinone/methylchloroisothiazolinone (MI/MCI), and formaldehyde.10,11 In a recent retrospective cohort study of pediatric patch tests, cocamidopropyl betaine and benzoyl peroxide were included in the list of top 10 allergens.10 It is important to note that three of the allergens mentioned above, cocamidopropyl betaine, propylene glycol, and benzoyl peroxide, are not found on the Thin-Layer Rapid Use Epicutaneous (TRUE) patch test.

Nickel and cobalt are frequently found in children’s jewelry and common metallic household items, such as scissors, keys, and electronic devices. Many products marketed as “gentle” or “sensitive” for babies, the common being soaps, shampoos, moisturizers, and sunscreen may contain several other common allergens and can cause generalized or widespread dermatitis (Table 1).4,5 It is also important to consider transfer of allergens from caregivers and siblings, especially with fragrance, isothiazolinone, and formaldehyde, when counseling on allergen avoidance. There is also the potential for allergens, such as nickel, in dietary sources and patients may benefit from diets that limit oral exposure to allergens. Benzoyl peroxide can also be a common irritant5 that should be considered in adolescents using topical acne medications. 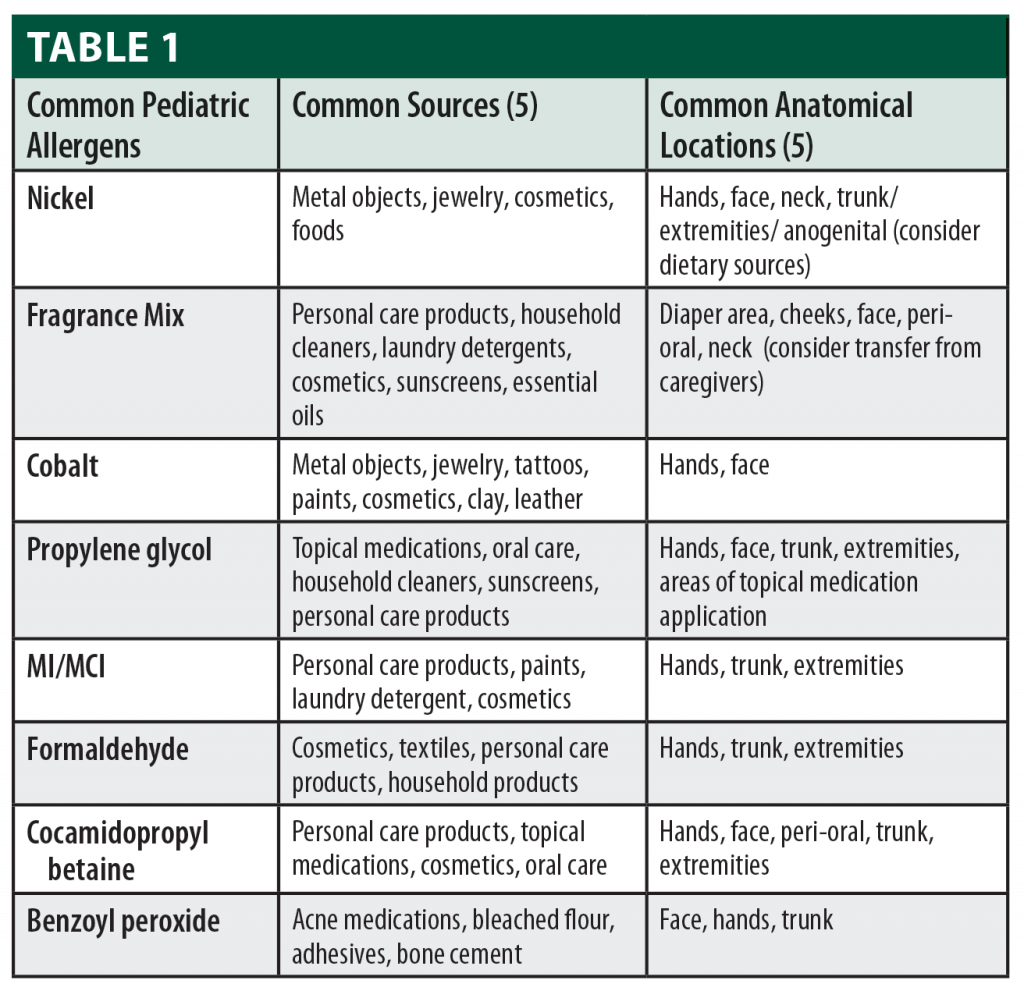 WHEN TO PATCH TEST
Sensitization to allergens may begin in infancy and can lead to ACD in younger children.6 If patients have refractory dermatitis despite traditional treatment, patch testing should be considered prior to initiation of systemic therapy.8 Patch testing should also be considered in children with atypical dermatitis patterns, chronic hand or foot dermatitis, and adolescent onset AD.3,6,8 Persistent dermatitis of the eyelids, genitals, or peri oral region should also increase suspicion of ACD.6,8 See Table 2 for indications for patch testing in pediatric patients. 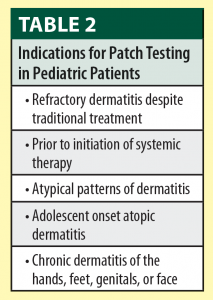 CONCLUSION
With further research in the fields of both ACD and AD will lead to a better understanding of the role of skin barrier and genetic susceptibility to these conditions. It is important to recognize ACD in pediatric patients and offer extended series patch testing with the North American Contact Dermatitis Group (NACDG) series when possible, as common allergens can be missed on the Thin-Layer Rapid Use Epicutaneous (TRUE) test. Allergen avoidance may sometimes seem overwhelming to caregivers and patients; therefore, appropriate education on care of skin barrier and continued management of AD, in addition to allergen avoidance, is key to successful management of disease.