Spots on Tots: A Case Study of a Widespread Asymptomatic Rash in a Pediatric Patient 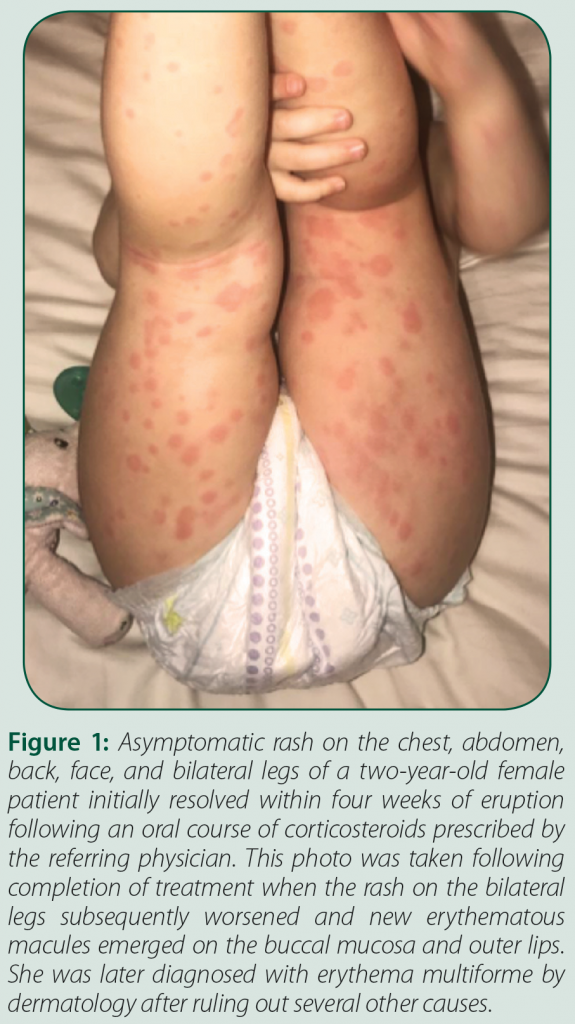 CASE DESCRIPTION
A two-year-old girl presented for evaluation of an asymptomatic rash on her chest, abdomen, back, face, and bilateral legs. The lesions were erythematous, macular, and annular. They were neither tender to palpation nor itchy. The eruption was approximately four weeks duration and seemed to have initially resolved following an oral course of corticosteroids, but then subsequently worsened after completion of the treatment to include erythematous macules on the buccal mucosa and outer lips (Figure 1). The patient’s referring physician subsequently instituted oral cetirizine, oral hydroxyzine, and topical triamcinolone with mild improvement. The child was in good health with no past medical history and was not taking daily medications. She was diagnosed with erythema multiforme (EM) by a dermatologist after ruling out several other causes.

DISCUSSION
EM is an acute, immune-mediated inflammatory rash. It is characterized by target lesions that are fixed and typically distributed symmetrically on cutaneous skin.1,2 EM is often accompanied by ulcers or bullae of the mucosa, including the mouth, genitals, or ocular regions.2 Of mucosal regions, oral mucosa is the most common location. If only one mucous membrane is involved, it is classified as EM minor. If two or more mucous membranes are involved, it is classified as EM major.3,4 EM minor is present without associated symptoms, while EM major may present with fever and/or arthralgias.4 EM occurs in patients of all ages but is more frequent in adolescents and less common in the pediatric population. The epidemiology of EM is not well-known but is thought to be significantly less than one percent.4 Currently, little is known about pediatric EM and its characteristics due to its lower prevalence.1 Many patients may only experience one episode in their lifetime, but a small portion of patients experience recurrent bouts of EM. Recurrent EM is uncommon and not well understood, especially in the pediatric population but is believed to have a greater male predominance, lead to more hospitalizations, and less likely to be caused by HSV infection when compared to the adult population.2 EM is a benign and self-limited condition that is believed to be overtreated pharmalogically and may lead to unnecessary hospitalizations.4

The most common known triggers of EM are infectious agents and drugs. Herpes simplex virus (HSV) is the leading cause of EM in both children and adults.1 HSV-related EM is believed to involve a cell-mediated immune process targeted against viral antigens deposited in lesions on the skin.4 This is supported by HSV DNA present in skin biopsy specimens of patients with EM. The second most common cause is by Mycoplasma pneumoniae infection.1 Culprit medications known to trigger EM frequently include B-lactam antibiotics and non-steroidal anti-inflammatory drugs (NSAIDs).3 In children specifically, the most common offending drugs are antibiotics. Although EM is rare in infants, the most common trigger during infancy is vaccination with diphtheria, tetanus, and pertussis (DTaP) vaccine being the most frequent cause followed by the hepatitis B vaccine.1 Less common factors contributing to EM include malignancy, autoimmune disorders, radiation, sarcoidosis, and menstruation.4
EM was first characterized by von Hebra in 1860 as a component of a spectrum of diseases including Stevens-Johnson syndrome, toxic epidermal necrolysis (TEN), EM major, and EM minor. This spectrum was thought to represent an immune reaction from a multitude of etiologies which could be limited to skin manifestations or extend to a systemic presentation with serious morbidity and mortality. In 1993, Bastuji-Garin et al suggested EM was a separate entity from the SJS/TEN spectrum with its individual etiology, clinical course, and pathophysiology.3

The patient’s history and presentation are the main diagnosing features of EM. EM lesions vary from patient to patient and may evolve over the course of the disease. However, lesions typically appear similar in a particular patient at a given time.4 The classic presentation of EM includes acute target lesions with a well-defined annular border that are less than 3 cm in diameter. The lesions consist of three specific zones with two concentric peripheral erythematous rings and a dusky-appearing central region. Atypical lesions may appear with ill-defined borders and only two distinctive zones.3,4 Cutaneous lesions may start as annular, erythematous papules that later evolve into the hallmark target lesions. However, target lesions are not always present. Mucosal lesions often manifest as erythema, bullae, or painful erosions.4 Cutaneous lesions most commonly present on the upper limbs and lower limbs, followed by the trunk and face.3, 4 The distribution of lesions is usually symmetrical and often presents on the extensor surfaces and spreads in a centripetal pattern. It may also occur at sites of trauma or sunburn. EM typically appears over the course of 3 to 5 days and resolves within two weeks, however, post-inflammatory erythema may be observed for months. Cases with significant mucosal involvement may experience prodromal symptoms including fever, malaise, arthralgias. Cough and respiratory complaints may also be present in those with EM related to M. pneumoniae infection.4

Although the diagnosis of EM is mostly clinical, a biopsy may be necessary in infants or young children to rule out autoimmune conditions.1 A biopsy of an EM lesion will reveal subepidermal separation and necrotic keratinocytes from the central portion of the target and dermal changes, including vascular dilation and papillary dermal edema in the peripheral portion of the target.4 There are no specific laboratory tests for EM, but laboratory markers for inflammation or infection, including white blood cell count, C-reactive protein (CRP), and erythrocyte sedimentation rate (ESR or sed rate) may be elevated in patients with EM.3, 4 In pediatric patients, indications of infectious etiology, including fever at presentation, a history of infectious illness in the last four weeks, or laboratory markers suggestive of infection may further support a diagnosis of EM.3

EM is often misdiagnosed as SJS due to the similar clinical and histopathological features, however, many clinicians now recognize their differences.2,4 Urticaria multiforme (UM), a variant of urticaria, is a common misdiagnosis of EM in the pediatric population. UM also presents with widespread annular target lesions, however, the lesions in UM are different in that they are migratory and fleeting. UM may also be accompanied by dermatographism, which is not seen in EM. Another common differential is Mycoplasma-induced rash and mucositis (MIRM), which presents as a target rash with minimal subcutaneous and mucosal involvement limited to one or two sites associated with a M. pneumoniae infection. It is often accompanied by a fever in pediatric and adolescent patients.3 If the diagnosis is unclear, a skin biopsy should be performed. However, if the differential diagnosis includes autoimmune bullous disorders, a second skin biopsy with direct immunofluorescence study should be performed on unaffected skin adjacent to a lesion.4 It is imperative to recognize EM early to avoid unnecessary use of antiviral therapy and hospitalizations.2

The clinical course of EM is usually self-limited and resolves within several weeks without significant sequelae, but may need to be more closely managed in the minority of patients that experience recurrent EM.4 Management of EM in children consists mostly of supportive care but may include corticosteroids for severe cases or recurrence.1 Although typically asymptomatic, some patients may complain of itching or burning of lesions.4 Over-the-counter (OTC) treatment options, including diphenhydramine for itching and swelling or acetaminophen for fever or discomfort, may be implemented.5 However, treatment of persistent or recurrent EM in all ages of patients may prove to be difficult. Due to the self-resolving and periodic nature of EM, it is challenging to determine the effectiveness of treatment agents. First-line agents typically include corticosteroids and/or antivirals to treat underlying HSV infections. Although poorly studied, prednisone has shown clinical efficacy, but may lower the immune response, contributing to additional episodes of EM and/or recurrent HSV infections. Additionally, antiviral medications have shown efficacy in the adult population but less effectiveness in children. For patients with recurrent bouts of EM unresponsive to first-line agents, immunosuppressive or anti-inflammatory agents are often implemented. However, pediatric EM has been shown to have a lesser response to immunosuppression when compared to adult EM.2

CASE CONTINUED
For the patient in this case, her EM had initially been treated with a course of oral corticosteroids. After initial improvement, she began to experience a rebound worsening of the rash including mucosal involvement following completion of the treatment course. She then began a treatment regimen consisting of oral cetirizine, oral hydroxyzine, and topical triamcinolone. Several frustrating weeks went by with minimal improvement to her lesions. Due to the frequent infectious etiology of EM, an antistreptolysin O (ASO) titer was performed. Her results were significantly higher than normal range. She was then treated with a course of oral antibiotics. The rash was constant throughout treatment with no resolution of lesions, and the rash remained for 2 to 3 weeks following completion of the antibiotic and a repeat ASO titer with normal results. She and her mother were then recommended various diagnostic and treatment options, including continuation of current treatment regimen of cetirizine, hydroxyzine, and triamcinolone. Other options included a trial of an extended course of oral corticosteroids, a punch biopsy of the skin for further testing, or discontinuation of all current medications with watchful waiting. The patient’s mother opted for discontinuation of all medications.

CONCLUSION
Three weeks later, the patient returned to the clinic with remarkable improvement after discontinuation of all medications and watchful waiting. The lesions were resolved with no signs of a recurrent eruption. At her six-month follow up with her pediatrician, the patient remained asymptomatic and with no evidence of lesions. Even though oral corticosteroids are often used as first-line treatment for EM lasting more than two weeks, the practice of watchful waiting proved to be effective therapy for the patient in our case in the treatment of EM.